Emma Bates gets a fresh start on her pro career

Emma Bates gets a fresh start on her pro running career

Just a year ago, Emma Bates wasn’t sure if she was going to continue with a professional running career.

A member of a professional training group in Boston, her performances had stagnated, forcing her to reevaluate her future in the sport.

Knowing she needed a change, Bates returned to a place she knew well: Idaho, where she was a 12-time All-American cross country and track runner at Boise State University. She and her fiance Kameron Ulmer bought a home an hour outside of Boise, far away from the hustle and bustle of Boston that Bates sought refuge from.

Leaving the confines of a sponsored pro training group also meant losing a paycheck to run for a living. Bates picked up two jobs and was working 50-60 hours a week, plus an hour long commute both ways.

“I learned to work hard when I was working that much,” Bates said. “I was always tired. Running was the easy part of my day. That’s when I figured out I really wanted to do this.”

That simplicity soon paid off.

Bates was originally an alternate for the American team at the World Half Marathon Championships in March and earned her way on the team when Sara Hall dropped out. Despite not specifically training for the race, Bates made the most of the opportunity, running 1:11:45 to set a personal best by over a minute.

After that performance, Bates quit one of her jobs as she realized she wanted to put more focus back on running.

“It gave me a lot of perspective. It wasn’t until I had to take time out of my day to run that I realized how much I really love running,” Bates said. “Once I started to enjoy it more and more, the times started to come and the workouts started getting faster and faster.”

An additional boost came as Bates and others formalized what was a loosely organized training group coached by her fiance Ulmer into a USATF sanctioned club, the Idaho Distance Project.

Boise isn’t what most would consider a training mecca, but it has attracted the likes of recent Canadian national marathon champion Kinsey Middleton, steeplechase All-American Marisa Howard, and trail runner Kristen Findley to join the group. 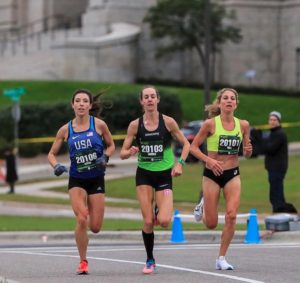 “I wasn’t expecting to be that close to them in the race…it was something incredibly special,” said Bates. “It was a turning point for my training.”

Those races set Bates up perfectly as she targets her first marathon this Sunday in Sacramento.

She has boosted her mileage to 110-115 miles a week versus the 80 miles a week she would run training for a track 10k and has adapted well to the longer tempo workouts marathon training is known for.

“The workouts mesh well with the type of runner I am. I can go for a long ways,” said Bates. “I had a goal of being in the top three of my first marathon, but now we’re actually thinking about time goals and even winning.”

Solid training, a fast course, and typically good weather are providing Bates what she needs for what could be not only a successful first marathon but also the potential pay-off as 2018 USATF Running Circuit champion.

Bates currently sits in second place in the circuit standings behind Sara Hall. A seventh place finish or better at CIM would vault her into first place and the $20,000 first prize.

“A year ago, I would’ve told you I don’t know if I still want to run as competitively,” Bates said. “To be in this position coming in as one of the top Americans I never thought was possible.”