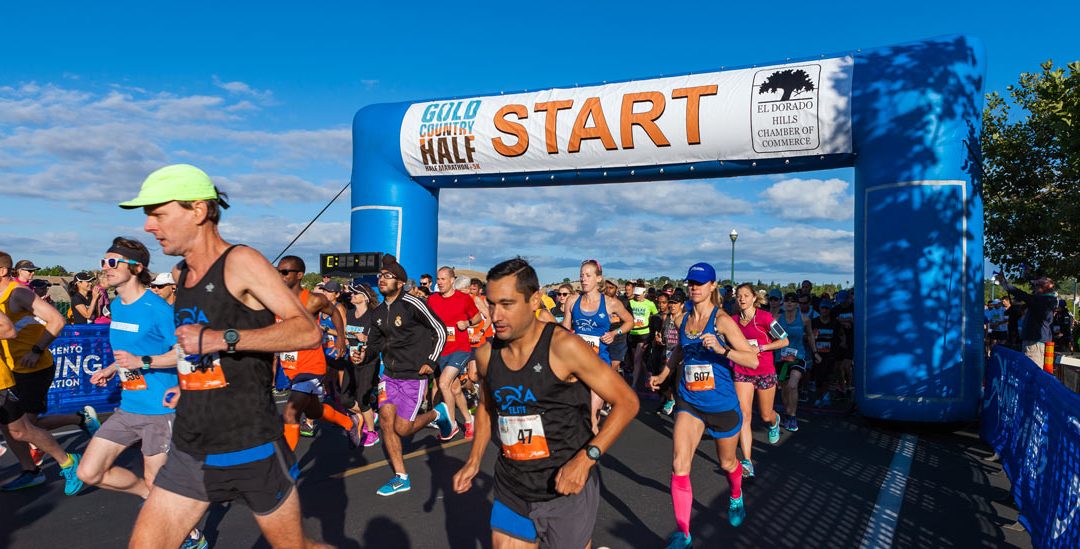 The Gold Country Half delivered El Dorado Hills’ inaugural half marathon with a combination of a strong hometown vibe and sense of community with first-class race operations and a talented elite field.

Runners in the half marathon, 5k and Kid’s K gathered in the El Dorado Hills Town Center before heading out on the courses run entirely in beautiful El Dorado County.

More than 1,000 runners participated in the event, organized by the El Dorado Hills Chamber of Commerce and managed by the Sacramento Running Association (SRA).

The half marathon course featured some rolling hills but race organizers focused on keeping the route along the valley floor and as flat as possible.

“There was a head wind for a good part of the race and I got a cramp for about two miles, but it was a good race,” said Klinger.

“I am looking forward to a strong fall cross country season.”

Gonzales, of SRA Elite, delivered a strong performance for the win in the women’s half marathon with a 1:25:26 effort. SRA Elite teammate Megan Oldenburger (1:28:27) and El Dorado Hills native Hayley Floyd (1:31:24) took home the next two spots.

“There were a lot of hills on the back stretch,” said Gonzales. “I grew up around hills so I reminded myself to be slow and steady.”

“This is just my second race in five years after taking some time off after college and I have only been running with a structured training plan for about a month.

“It was good to see that I still have it in me.”

“The course was challenging,” said Mallory. “I ran pretty controlled and it was a good race.”

“It was good to try something a little different.

“I didn’t know a lot about El Dorado Hills but it is nice up here and the hills offer a nice change and a mental challenge.”

Hekkanen, the soon-to-be St. Francis High School freshman, gave the hometown crowd something to cheer about as she came across the finish line.

“I felt good but started to get tired the last mile,” said Hekkanen. “I kept going and wanted to win.”

Many local businesses had a strong presence in the finish festival where runners mingled and enjoyed food, beer and fun post-race.

“As a first year race, we didn’t know what we didn’t know,” said El Dorado Hills Chamber of Commerce president and CEO Debbie Manning. “But the reception from this community and region really proved that we needed a half marathon.”

“The SRA, all of our sponsors and volunteers – it has been an overwhelming experience.”

SRA events include the recently completed Gold Rush 50k, the Capital Cross Challenge on Oct. 7, the Run the Parkway on Nov. 4, the 35th annual California International Marathon on Dec. 3, the Super Sunday Run on Feb. 4, 2018and the Credit Union SACTOWN Run on April 8, 2018.