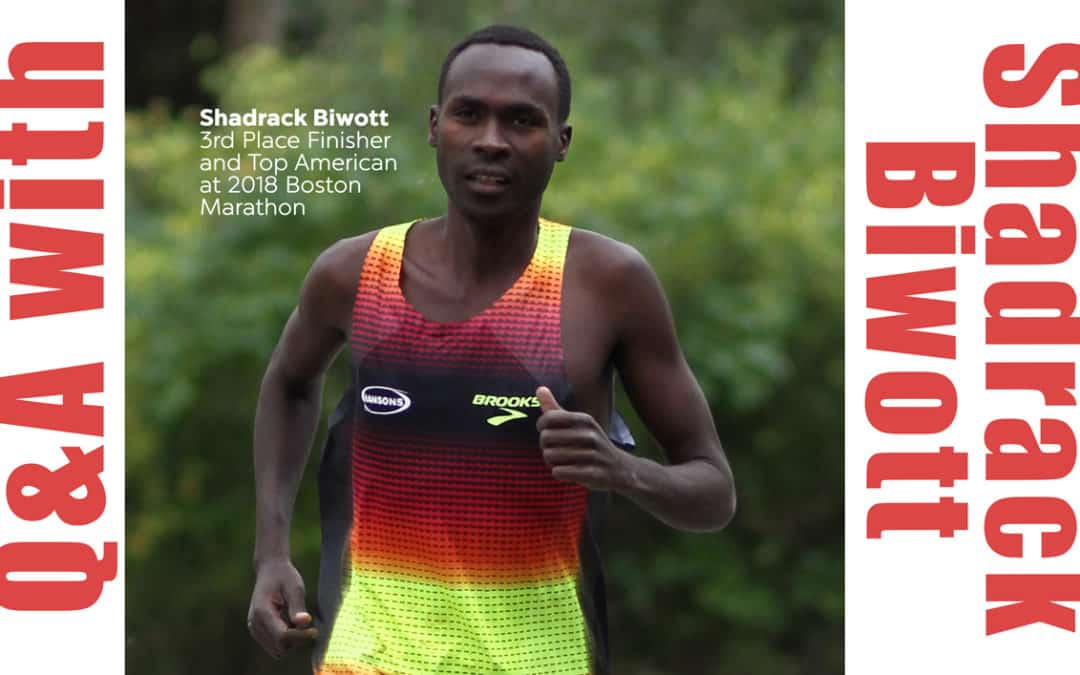 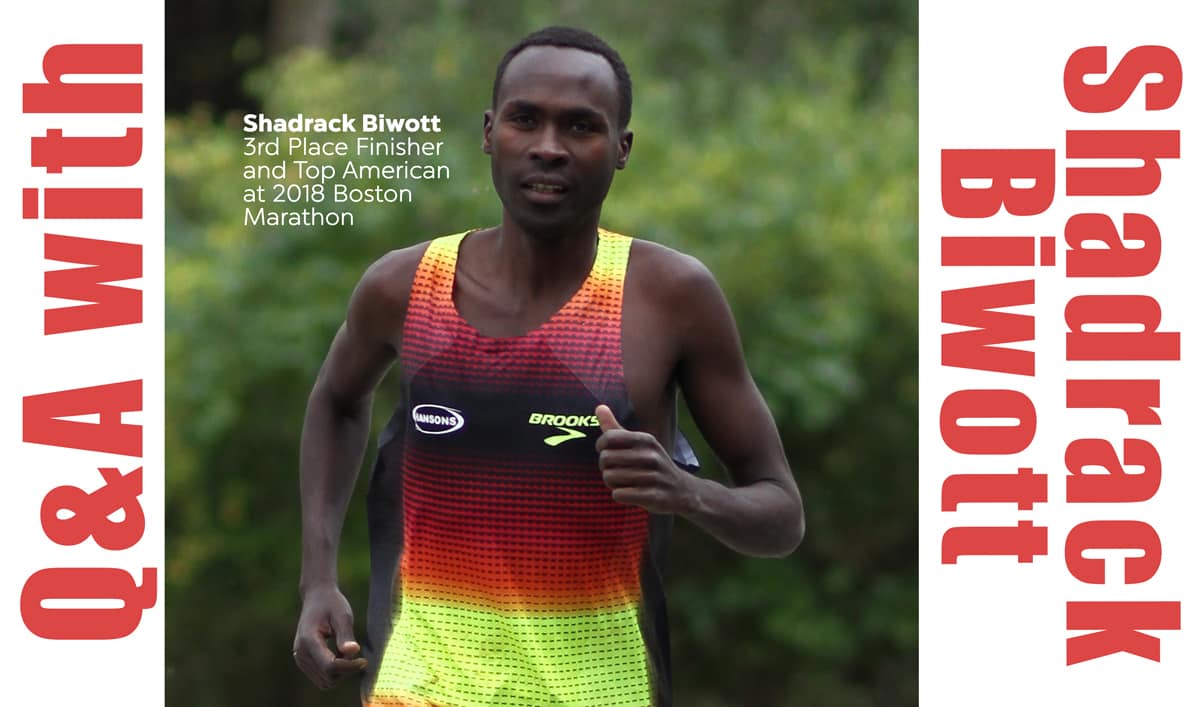 Q&A with Boston Marathon’s Third Place Finisher, Folsom’s Shadrack Biwott
On Monday, April 16 Folsom resident Shadrack Biwott was the first American across the line at the 122nd Boston Marathon, placing 3rd in 2:18:35—the highest ever finish at a World Marathon Majors by a Sacramento area resident.

Biwott was born in Eldoret, Kenya, moved to the United States in high school and went on to attend the University of Oregon before moving to Folsom in 2012. Shadrack is currently sponsored by Brooks and does most of his training on the trails and bike paths around Folsom, while being coached by Kevin and Keith Hanson remotely. Shadrack stopped by the Sacramento Running Association’s office after returning from Boston to share his thoughts on the race.

Sacramento Running Association: So first off,  everyone is talking about how the conditions in Boston were brutal—pouring rain, temperatures in the low 40s, with 20+ mph headwinds. What were your thoughts about the weather before your race? Were you worried?
Shadrack Biwott: We started looking at the weather two weeks out and the Hansons are very good at details. They kept watching and kept adjusting things a little bit. By Sunday we realized, it’s for real and it is going to be a tough day out there. Nobody likes running in the rain, but I thought the bad weather would actually be good for me. It is going to work in my favor. I told myself that I am going to be that guy that stays tough, sticks with it and just keeps chipping away.  I had the opportunity to make something happen and luckily I did.

SRA: Did your race plan change at all with the weather?
SB: Well the plan was always to stick with the lead pack. I knew I was ready. If it was a good weather day, honestly, I think I was ready for sub-2:10. However, once we realized how bad the weather was going to be, we forgot about the time and just focused on placing as high as possible. My coaches saw that at 10k there would be a strong headwind of 15 mph and then get even stronger as we got closer to Boston. So we decided I would just stay at the back of the lead pack and let them break the wind a bit. Coach Kevin Hanson also kept emphasizing that I try not to run alone during the race. He told me that if it meant I would have to run a 4:45 for one mile to keep up with the pack, I shouldn’t be afraid to do that.

SRA: How did you plan your wardrobe for what was one of the worst marathon weather days Boston has ever seen?
SB: At first we realized that I would need to have at least a t-shirt under my jersey, but last minute race morning we decided to add a light jacket because the rain felt so cold. So I decided to start with the jacket and then dropped the jacket somewhere around six miles. I also started with arm warmers and gloves, but pulled those off around the 23 mile mark. Honestly, I only took the gloves and arm warmers off to help wake myself up. It was so cold when I took those off, but that different kind of pain did work to wake me up and get me going for the last few miles.

SRA: So take us through how the race played out for you. Did you follow the race plan?
SB: Yes, pretty much. I started at the back of the pack, but at mile five, the pack took off faster than I was ready for and I got dropped a little bit. Luckily at mile six Kevin and Keith were there and shouted at me, “Good job Shaddy, but get back up there with the leaders, don’t be in no man’s land!” So I looked at them, gave them the thumbs up and was like, alright I guess I got to catch back up. So for about two minutes, I just grinded through the wind to get back up there, running much harder than felt good. Luckily once I caught back up to the pack, they actually settled the pace a little and I felt good again.

SRA: So you were with the lead pack most of the race? Did that pack just slowly dwindle down?
SB: Yeah, so we were a big pack until about the half-marathon mark and as soon as we started getting into the hills the group started getting smaller and smaller. At some point, around maybe 15 miles or so, I looked back and saw that guys were starting to fall off. So I went to the front of our pack to keep the pace going and pretty soon we were down to only five of us in the lead pack, with Kirui way out front. Within maybe another mile, two of those five had also dropped off.

SRA: At some point did you make a big move to get into the third place position?
SB: When we got to the top of the hill, it was Kirui out front, Kawauchi just in front of me, and one guy just behind me. So on that downhill I just had to push a bit to drop the fourth place guy and I was like, ‘Is this really happening?!’ At that point it was still five miles to go. I was just thinking, ‘I hope I am doing the right thing. I’m tired now and the wind is just brutal. I hope I can sustain this pace.’ I had just watched the Commonwealth Games Marathon the week before and an english guy was leading until 40k and then he passed out. So I was thinking about how nothing is ever certain. A little further on I knew I wasn’t going to catch Kawauchi because he made such a strong move and in my head I thought that Kirui would be way out in front and uncatchable, so I wanted to really focus on securing third place and making sure nothing went wrong in those final stages.

SRA: How did you feel after you crossed the line?
SB: I finished and was just exhausted, but it was the sweetest moment. I knew I was ready for a big race, but I didn’t know if this past weekend would be the weekend it all came together. I could barely walk when I crossed the line and had to be held up. I was shaking and my legs were buckling, but I was just so happy.

SRA: Have you ever raced in weather like that before?
SB: Never in my life. That was miserable. I mean seriously, it was so bad, there was no escape. The rain maybe stopped for a little bit, but then the wind would still be there. You would be wet from the rain and the wind would pick up and make you even colder. Then you would just get pounded with rain again.

SRA: How was your training leading up to Boston? Did you do anything different this training cycle?
SB: The one thing for sure that was different this time was I ran a ton of miles. I ran 140 miles for four weeks straight at one point. After that I was so tired and that was just a little bit before I raced the New York City Half Marathon. When I went to New York I didn’t really know what was going to happen because I was so tired. However, my coaches, these guys are so smart. They know marathon training so well and they told me not to worry about it, that once I got my legs back under me I’d be fine. Surprisingly, I felt really good during the half marathon. I ran with the leaders for the first 10 miles of the NYC Half and then let them go the last few miles to save myself for Boston. After that, I came home and I had incredible workouts. I had three workouts where I was just like, oh my god I’m ready. If this is not ready, I don’t know what ready is. I was so excited. Those last couple of weeks and up to Sunday before Boston, my legs just felt so good.

SRA: 140 mile weeks?! No wonder you felt a bit tired. Had you done mileage like that before?
SB: I didn’t even know I could run that kind of mileage, but I was able to keep the mileage up week after week. I just trusted my coaches. I was tired, but I trusted them. So yeah, those four weeks at 140 were just so tough, but then we brought it down to a 120 mile week and that felt good, but it is still 120 miles a week, which is crazy.

I also hardly tapered, compared to what I use to do. Marathon week I ran 80 miles. Before training with the Hansons, I use to do no more than 60 miles marathon week total—so like 30-35 miles the first 6 days and then the 26.2 mile race. However, this time we did more race week and my legs actually felt really good.

SRA: Did you get a chance to celebrate after the race? Any post race celebratory foods or special treats you always have to have?
SB: There was a post race celebration, but it took awhile to just get warmed back up, do interviews, drug testing, shower, and go to awards. I did make it to the after party eventually, but I just wanted to sleep and be off my feet and for some reason the food just didn’t seem that appetizing. To be honest, I always want pizza after a marathon. Seriously, like after a marathon all I want is a pizza, like the really really greasy kind. I don’t get it. Any other day I would not want something like that, but after the marathon that’s all I want.

SRA: Did your family take the trip out to Boston with you?
SB: No, my wife, Katharine, was scheduled for jury duty. She ended up not even doing it because she is a lawyer and they didn’t want a lawyer on the jury. Had I known it would work out like that she probably could have made the trip to Boston, but she was able to watch the live stream on TV.

SRA: Did your kids get to watch the race as well?
SB: The kids watched the first half of the race on TV, but then they had to go to school. Katharine doesn’t mess around and told them they had to go to school. They watched the second half of the race when they got home, but the school did announce to the class that I had placed third. So they were super excited at school and when they got home.

SRA: Any plans for upcoming racing?
SB: Right now I have planned to do the Boston Athletic Association 10k on June 24 and then maybe a half marathon, just some supplementary road racing until later in the year. The main focus will be another big marathon in the fall.

Will we ever see you at the California International Marathon here in Sacramento?
SB: I will definitely do CIM sometime before I retire. That one I am sure I will. I have such a great running community here. I have met so many friends on the bike trail in town and you know, they always ask if I will race CIM. I have so many people from this community rooting for me and following my career. It would be great to race in-front of the hometown crowd.