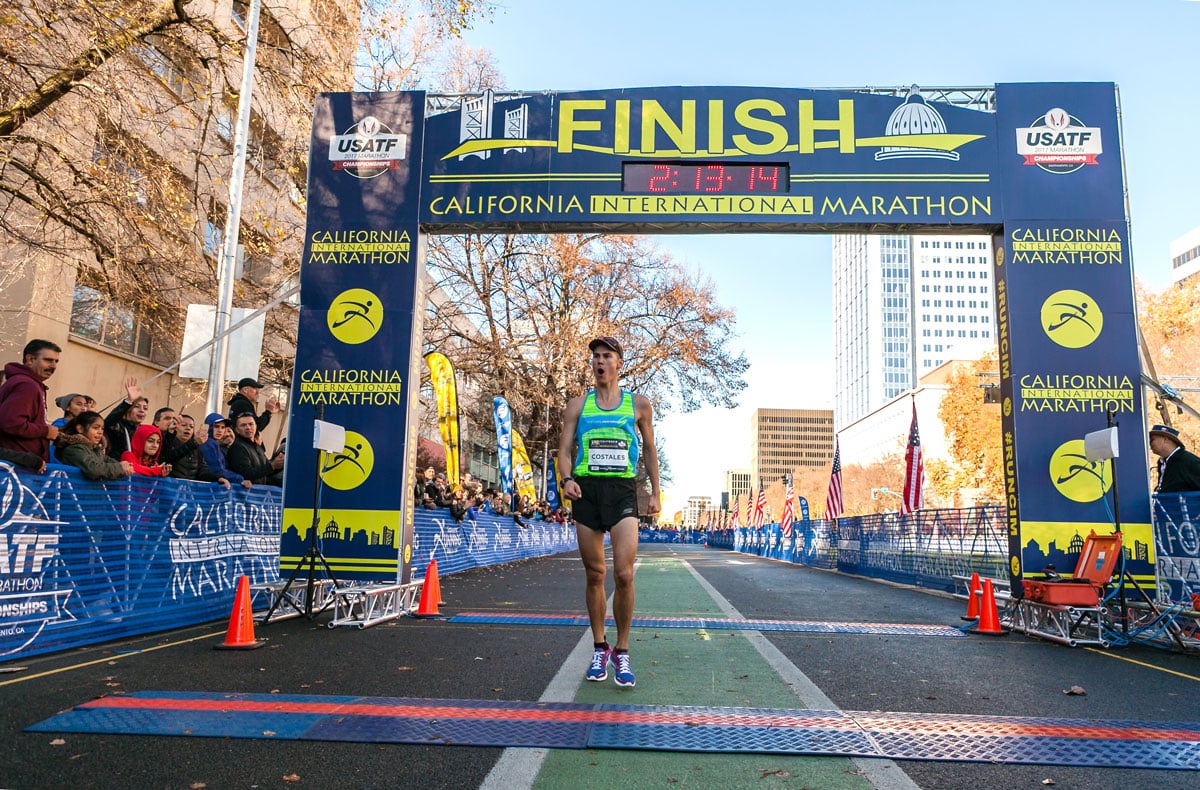 “Mile 5 or 6 I was right in front, but I could tell there were thirty people right behind me.”

Anthony Costales jumped back on the marathon train after a year and a half away. He’d been through a couple of rough ones in Utah, his current state of residence in the spring of 2016. The first one in Ogden found him in a storm so bad he had to pull the ripcord at mile 18 due to hypothermia. Not wanting to waste his fitness store, Costales jumped into the Utah Valley Marathon 3 weeks later and found himself in a yoyo-ing pace with a group of East Africans rolling through Wasatch and Utah counties. The surges thrown in by his competitors left him fifth out of a front pack of five in 2:24.31.

Beat up and worn down, Costales, a 2:17 man at that point, needed some time away.

“My head needed rest. You get in these marathons, you get done with one and you start another cycle- it wears you down.” He removed himself from the spin, but knew he’d be back in eighteen months, this time at the 2017 US Marathon Championships in Sacramento, where he would have thirty people hot on his heels.

Costales is a local boy. He grew up in Fairfield, CA, ran for American River Community College in Sacramento before going north to Chico State where he accomplished the ‘Workingman’s Sub4’ cracking the thirty-minute mark in the 10k for Head Man and NorCal coaching legend, Gary Towne.

The first road race Costales ever competed in was the CIM relay, where he and 5 of his high school teammates traversed separate segments of the route from Folsom to Sacramento. Costales knows the streets that form the California International Marathon. They mean more to him than just lines on a pixelated map pulled up on an internet browser. The camber of Fair Oaks Boulevard is a shape he stared down when he first learned to love the sport.

Coming into the 2017 US Championship race in Sacramento, Anthony decided to throw time out the window and run up front with the contenders to see where he could stack up at the finish when the dust settled. The pack that Costales spearheaded was not ordinary by US Championship or even World Major Marathon standards. When the Sacramento Running Association earned the right to host the US Marathon Championships for 2017 and 2018, they instituted a plan to entice the nation’s top distance running talent, not by the few, but in droves.

Two years before the Olympic Trials were to take place, the powers that be at the SRA decided to award $1,500 to anyone who hit the Olympic A standard (2:15 for men, 2:37 for women) and $500 to anyone who hit the B standard (2:19 for men, 2:45 for women). These were to be bonuses on top of the purse devoted to top ten finishers. Your standard World Major will throw a hefty purse at the top handful of finishers, but those just behind the tip of the spear receive a finisher’s medal just like everyone else. This practice leads to a big-league headlining time, but a pack that thins out pretty quickly on the heels of the stars.

The SRA’s decision to reward Olympic Trials qualifying efforts combined with good old-fashioned hospitality, California charm, and a forecast that would make your local weatherman blush, yielded a depth of finishing marks not seen since the Reagan era. The mass of individuals giving chase darn near stretched the boundaries of the capitol city’s famous parkways.

“It felt more like a Sunday long run more than a race” said Matt Fecht, who added that people were sharing water bottles as they rolled through 20 miles 40 runners deep at Olympic Trials qualifying pace. Fecht is a school teacher from Warren, Michigan whose build is more stocky wrestler than lithe marathon runner. He sports a thick handlebar mustache on race day and has been making the pilgrimage out to Sacramento for the past five years because of the bang-up job done by the race organizers. He punched his ticket to the 2020 Olympic Trials in Atlanta at last year’s race, running a personal best, 2:17.40.

A living, breathing, sweating, spitting organism between the start and finish line, the pack stretched, and individuals emerged and solidified as they get closer to the finish line and eventually cemented their places as they crossed. Costales, who began the day by “sticking his nose in it” at the front faced the dilemma of how much effort to pour out over the last 10k. He didn’t want to finish the race with a lot left in the tank, but also didn’t want to pour too much out and risk a blow up before he could get to the finish.

With a measured hand, the local boy ended up fourth in a four-and-a-half-minute personal best of 2:13.13. The place, he expected, the time blew his mind. The winner of the race, Tim Ritchie sprung from the pack late and used a series of miles at near or under five-minute pace to secure the victory in 2:11.56, giving the finishing tape a signature punch with his fist as he clenched his teeth for the cameras. When all was said and done, ten men secured the Olympic A standard and 27 more got the B (13 women achieved the A standard and 37 achieved the B).

Costales will be back on the line this year as the highest finishing returner and his plan of sticking his nose in it at the front hasn’t changed all that much, save for a bit more confidence. Fecht will be back as well, along with a field that will rival last year’s historic depth. With a near ideal forecast and the deepest field in the United States assembled, onlookers will be itching to see just how many can duck under the standards this year. It wouldn’t be a complete shock to see someone break free and put up a winning time that even the papers in New York and Chicago might spill some ink over.