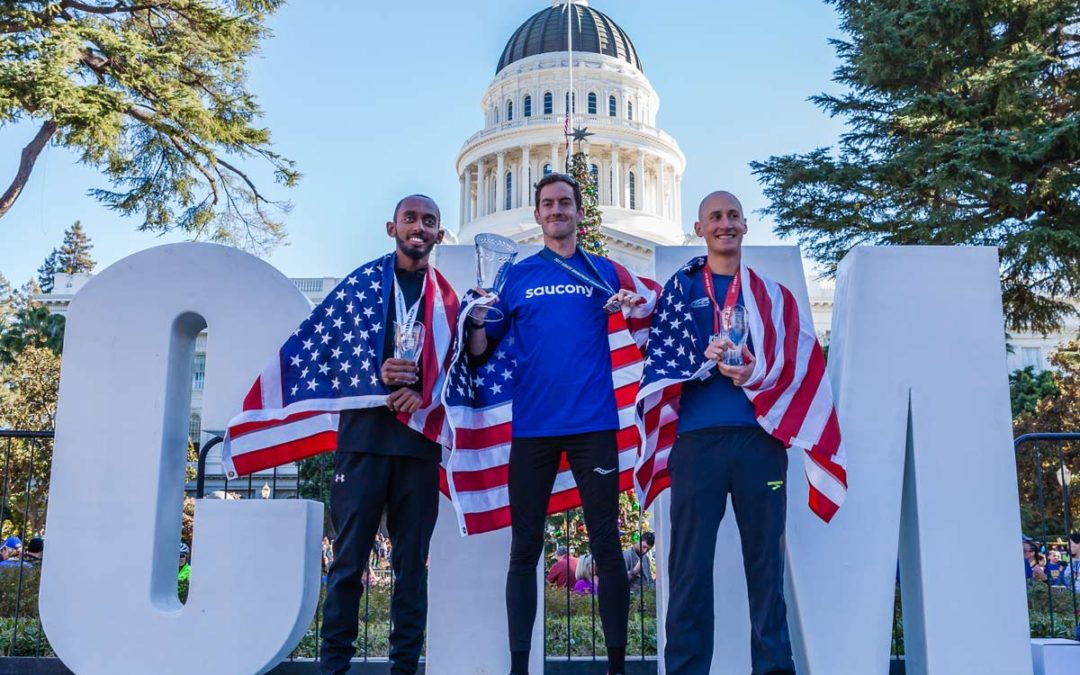 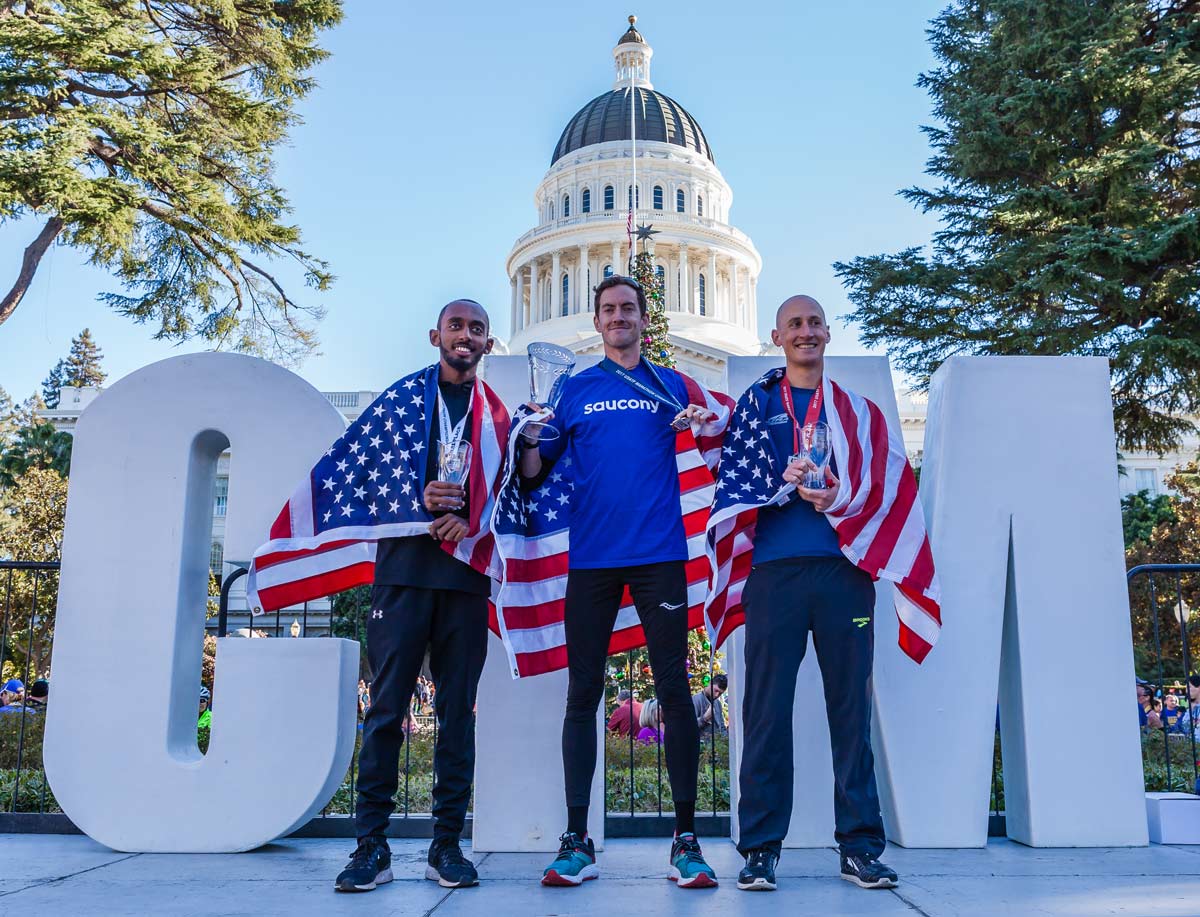 Perfect day for running leads to fast times across the board

Ritchie of New Haven, Conn., used a patient, come-from-behind strategy for a career-best 2:11:55 performance, surging ahead of runner-up Tyler McCandless (Boulder, Colo.) at about mile 23.

Hall of Redding, Calif., immediately took control of the race from the start with her sights set on a course record before registering a 2:28:10 finish, the second fastest time in race history.

Both took home $20,000 in prize money plus performances bonuses.

The cool, dry weather provided the perfect setting for a fast race as temperatures were in the high-40s to low-50s throughout the day under clear skies. Many runners in both the championship and open fields turned in top times, personal bests and Boston qualifying marks.

A record-setting field of approximately 7,300 marathoners and 900 relay teams started the race near the Folsom Dam with 7,100 marathoners finishing. Another 2,700 participated in the morning’s UC Davis Children’s Hospital maraFUNrun 5k. An estimated crowd of 55,000 lined the course, which runs through Folsom, Orangevale, Citrus Heights, Fair Oaks, Carmichael and Sacramento.

Much of the drama in the men’s race occurred shortly after the 20-mile mark and the proverbial marathon wall.

Ritchie stayed back with the chase pack at the start and throughout the middle miles, allowing Parker Stinson (Boulder, Colo.) to set the pace in his marathon debut. Stinson was under 10 minutes through two miles, pulling ahead of the field very early in the race. His lead continued to grow through 10k.

Stinson looked strong to mile 18 when chaser Jon Grey started to close the gap with Richie and the lead pack not far behind. Grey was eventually caught by the pack while Stinson hit the wall and began to struggle. At mile 22, Stinson felt pain in his abdomen and was forced to stop. He continued to run, but was quickly overtaken.

Ritchie, McCandless and Kiya Dandena (Flagstaff, Ariz.,) reeled in Stinson at about mile 23. Ritchie surged ahead of McCandless and Dandena at mile 24 with a 4:51 mile split to take control of the race.

As Ritchie turned the corner on 8th Street and strided up Capitol Mall towards the finish line, he had a big smile on his face and punched through the finisher’s tape in dramatic fashion to capture his first national title.

“This was my fifth marathon, and I’ve had some good experiences and some rough experiences,” said Ritchie.

“I wanted to come here, stay within myself, and run a really patient race.

“I wanted to negative split and if that put me in a position compete for a top five finish, I would’ve been grateful for that.

“The marathon isn’t over until you cross the finish line.”

“I’ve got to get a little older and better,” said Stinson.

“I always take risks and go for it but next time, I’ll just hope it sticks.”

Coming off a 2:27:21 personal best performance at the BMW Frankfurt Marathon just five weeks ago, Hall left little to the imagination in the women’s race, leading wire-to-wire to become the first American to win road running titles in both the mile and the marathon.

She was already one minute and 12 seconds ahead of her nearest competitor by the 10k mark, running comfortably with the 2:27:33 course record, set by Russia’s Volha Mazuronak in 2014, in mind. Hall came in under the course record pace at the halfway mark, extending her lead to two and a half minutes. By the 20-mile mark, she had dropped off the course record pace but was still well ahead of the chase pack.

Hall recorded three of the top six American performances in 2017, adding her CIM finish to her Frankfurt personal best and a 2:28:26 performance in the Tokyo Marathon.

On the awards podium, Hall expressed her appreciation for the support from her family, including husband and U.S. Olympic marathoner Ryan Hall and their four daughters.

“It’s so special to be here because it’s just two hours south of where I live in Redding,” Hall said.

“I’m blessed to have so many people out here supporting me.

“There’s such a learning curve with the event and you want to keep improving and notching it down.

“I’m fortunate to still be enjoying it.”

Roberta Groner of Randolph, N.J. had a breakthrough race to finish second behind Hall, setting a personal record by six minutes with her 2:30:37 performance. Carrie Dimoff of Portland, Ore. was third with a personal best of 2:30:53 while Samantha Bluske of Todelo, Ohio and Davis native Kaitlin Goodman also set personal marathon records to finish in 2:31:55 and 2:32:08, good for fourth and fifth place, respectively.

“It all came together and there were some women in front of me but I thought I could run 2:32 and it was ok if that was going to be first or fifth or tenth,” said Goodman.

“I even split to the second and I tried to just click off the miles like you do laps on the track.

“The marathon is a different ball game but the mentality is the same and I feel like I accomplished what I set out to.”

Those numbers are believed to be the most qualifiers at a single marathon in USATF history, giving the CIM the distinction of having the deepest American field in history.

“It has always been known as a fast course, but when we selected the race to host our 2017 USATF Marathon Championships, we didn’t anticipate today’s deluge of top performances.

“We thank race organizers for their commitment to supporting distance running in the United States and particularly for their support of our elite runners.”

All “A” standard athletes were given a $1,500 performance bonus in addition to their prize money, while the “B” qualifiers received $500.

Defending champion and U.S. Paralympian Charles Davis of Grafton, Mass. won the U.S. Association of Blind Athletes National Championships with an impressive 2:38:21 performance while Jason Dunkerly was second in 2:41:09.

The CIM is organized by the Sacramento Running Association, a non-profit organization dedicated to finding ways to encourage people of all ages and abilities to run. The SRA is committed to developing new, quality running events that appeal to a broad variety of runners.