Never Underestimate the Power of Popsicles

Never underestimate the power of popsicles

If there is something that I came to realize the last couple of weeks during our track club practices, it’s that kids will do anything for something sweet and refreshing as the mercury rises into the triple digits in Northern California.  The Sacramento Running Association Kids Track Meet Series were a great experience to be had by the Edward Kemble Elementary School Track Club, but it was about so much more than just going to put feet on the track.

Students at my school have been participating in running programs for a few years now.  We began by participating in the Project Fit program and running the MaraFUNrun, and then moved on to Runnin’ for Rhett as well.  The school where I teach is only Kinder through 3rd, so only our second and third graders were able to participate, but then we had kids who moved on next door to the 4th – 6th grade Cesar Chavez Elementary School that still wanted to be involved.   They then became our “coaches” that would come and lead stations and tally mileage, but they still wanted to race.  Not only would our students at Edward Kemble constantly be asking year-round when Runnin’ for Rhett would be starting again, but students at Cesar Chavez would also want to come back to be a part of it.  It then expanded for them to all be able to compete, and we were lucky enough to have ex-students of mine that were now in middle school to come back and serve as the coaches so that those in elementary were able to participate without having to sit out in order to help.

This system worked well for the last couple of sessions, and we were even able to participate in the SRA meets last year, which the students loved.  These meets made me start thinking on how to expand further on our running program though, and how to accommodate the needs that would arise.  To begin with, it’s mildly challenging to try to attempt to explain the concepts of long jump to over 80 children ages 7 to 12, much less to have to do so without a pit to land in.  The heat also was not our friend, as not only many students, but parents, were concerned about physical overexertion as we finished up our Runnin’ for Rhett program and moved into preparation for the SRA Track Meet program.  Students were still very enthralled with receiving their SRA mileage 5k, 10k, and even half-marathon ribbons, but the heat was beginning to take a toll on them.  Luckily, as a teacher, we have had plenty of experience utilizing what we do have, and making it work for the needs of our students.

Lea Wallace, SRA Elite talking with Students at Cesar Chávez Elementary School In order to liven things up for our students, our school was lucky enough to have SRA come and do an assembly not only for the second and third graders, but also all of the students next door at Cesar Chavez.  I also coach at Woodland High School, and training year round to run races is hard for high schoolers; so attempting to do the same with elementary school-aged children is even more trying.  This did cause some students to start to drop out of the track club, having been going to practices since the first week of October every Tuesday and Friday from 3:00 to 4:00.  They had only had a short break in the winter before they started up again to run the SACTOWN Miracle Mile, but let me tell you, it’s hard to not start practices up again when students ask you multiple times a week when they get to run again!  The assembly definitely revitalized students up again to attend practices, but that didn’t solve the problem about the lack of pits and equipment for students to practice with, or the non-negotiable Sacramento heat.

As a public school teacher, we constantly have to use whatever resources we have in a makeshift manner.  To substitute for sand and cushioned high-jump landing areas, we had to find mats in the physical education room to stack up and serve for these purposes.  I needed to make sure to model the proper technique for these events as to not injure oneself, even though it had been years since I had competed in either.  The Internet also became my best friend, as I was able to utilize the upcoming Olympics and YouTube to excite them with clips of world-class athletes preparing for their events and explanations on the road to Rio.  Not only did all of this get them excited for the meets, but was also a great lead-in to what they would be encountering at Luther Burbank.  And as was mentioned before, we couldn’t have done it without ice-cold treats!

Up until the first meet came around, our students would be asking what they would be doing at the meets on a regular basis.  Likely boosted by the school-wide assembly, attendance had risen at all of the practices towards the end of the program, along with their excitement for participating.  25 second-graders even signed up to come along, even though they understood that they would only be spectators.  The passion exhibited by the older students to be participating in the meets was passed down to them, along with the knowledge that much like this year’s third-graders, watching the meet was only the first step in being able to participate in it the next year.  The day of the first meet, we had every student lined up right after school, ready to jump on that bus to Luther Burbank.  One thing that can also not go without mentioning at this point was the extensive parent involvement.  Over half of the parents signed up to bring snacks or drinks to the meets after a group of parents that had students running with us for years suggested we organize in order to ensure the kids did not go hungry or thirsty.  It was no small task to put it together, but we were able to put it together, and the parents were readily supportive of our needs, both with the refreshments and the set-up.  Once at the meet, we went through our whole-group warm-up with the SRA volunteers and staff, and were ready to begin competing. 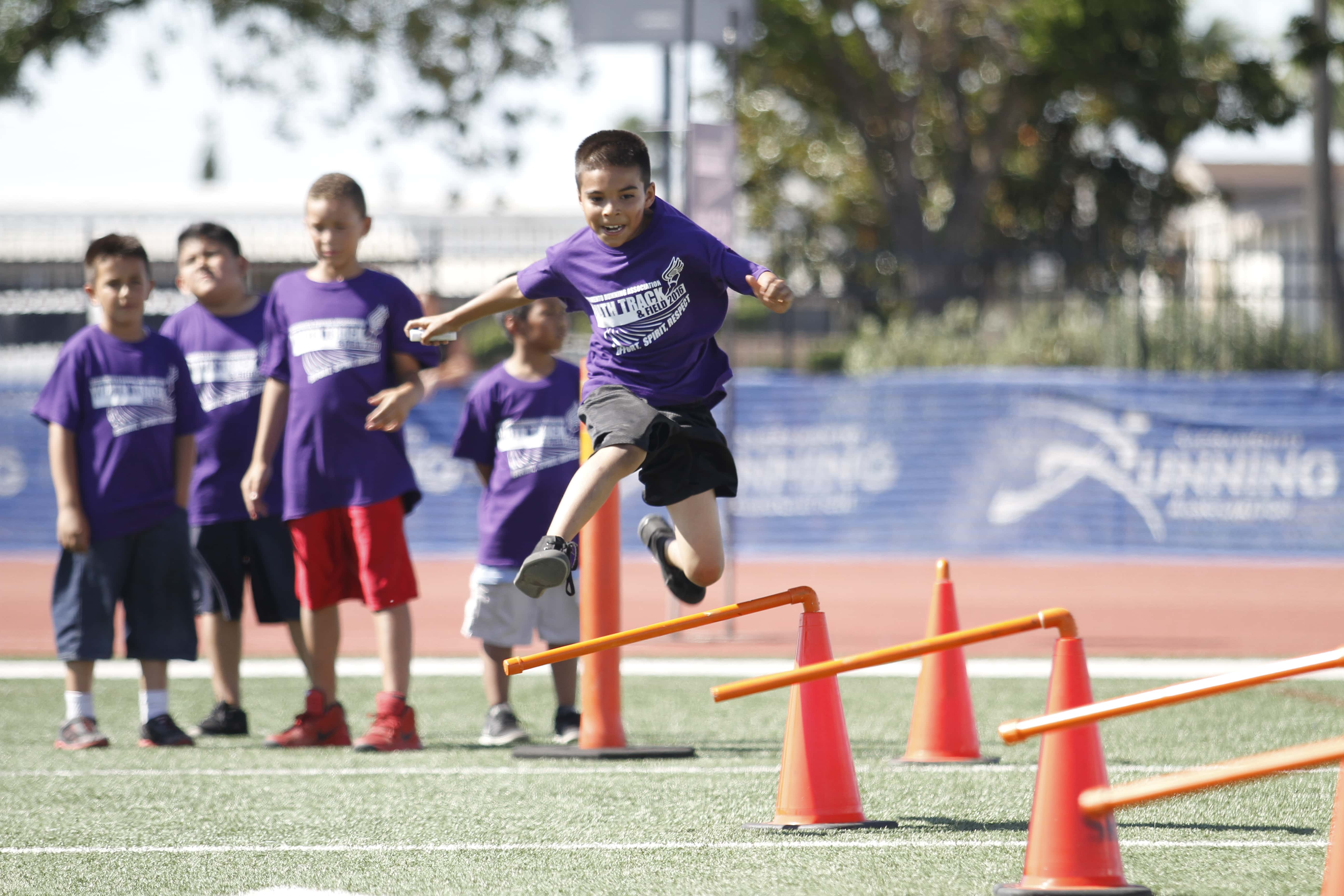 To kick off the track meets, Sacramento Running Association provided a great tie-in to it being an Olympic year.  The welcome message became an exciting opening ceremony, with having the schools come out with a United States flag and an Olympic Day flag, much like they would in Rio this summer.  This was a great experience for our students, especially with them having had the prior connection to what they had been shown about the Olympics during our practices.  Schools were called out in a similar manner out to begin the second and third days, having all met up in the end zone and then being introduced as they ran to their first events of the day.  The daily closing ceremonies were also quite eventful, allowing two students from each school to be recognized in front of all their peers for great sportsmanship.  Being recognized for their effort, spirit, and respect that was not only printed on every participant’s shirt but also consistently preached throughout the meets was a highlight for many students.  As soon as they realized what it took to earn the special dog tag handed out to these sportsmanship winners, students doubled their efforts to be great competitors and teammates.  By the third day, there were numerous students from my school that would have easily qualified for this award, but unfortunately, only two could be chosen.  As a consolation, every student did get to go home with a white ribbon that symbolized the effort, spirit, and respect that every single one of them exhibited throughout the three days of running faster, jumping higher, and throwing stronger.  Citius, altius, fortius, the Olympic motto.

We had students at the meets that crushed the competition to get first in their events, and there were others who did not find it so easy in their first attempt to compete against so many others.  Either way, I did not see anyone give up or look down upon their performance.  It was tempting to put together an “A” team of our fastest students for the 4 x 100 meter relay races, but even in the spirit of competition, we knew that teamwork and respect would stick with them longer than simply winning, so we did not; even regardless of how they finished, every student that crossed that finish line crossed it with their heads held high.  These meets were about more than running, jumping, and throwing; about more than looking at the place on the ribbon that each finisher would get at the end of their races; it was about building their character, and the message came across loud and clear.  At the end of the day, isn’t that what running and competition is all about?

Leonardo Zamudio is a teacher, high school coach, and member of #teamSRA. He has competed collegiately in distances from the 100 meter to 10,000 meters, and has completed multiple marathons as a part of his team, Running for Help.

From time-to-time we have guest bloggers post on our site.
The views, opinions and positions expressed within these guest posts are those of the author alone and do not represent those of the Sacramento Running Association. The accuracy, completeness and validity of any statements made within this article are not guaranteed. We accept no liability for any errors, omissions or representations. The copyright of this content belongs to the author and any liability with regards to infringement of intellectual property rights remains with them.