Biwott Makes Most of Childhood Runs 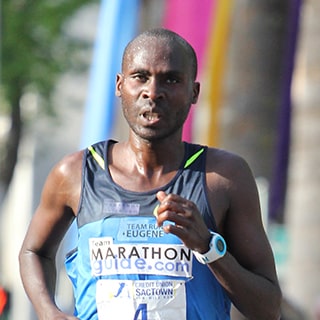 Kenya native and SRA standout benefits from an active lifestyle

Shadrack Biwott has a soft spot for kids. He remembers his childhood in Kenya when he and his four siblings had little but running.

School was four miles away. He recalls running there in the morning, then heading back home for lunch, then back to school for afternoon class and then back home again at the end of the day.

No electronic games to pass the time. Just running.

“It was part of our lifestyle,” said Biwott, a former All-American runner at the University of Oregon who joined the Sacramento Running Association’s Elite Team last month.

Biwott remembers having just enough money “to keep us from dying.” He also remembers being on his feet and outside for most of his waking hours.

“Kids were always outside,” he said. “The only time we were allowed to be in the house was in the evening when we were having dinner.

“All the kids from the village would show up, come up with games, kind of like flag football. We’d just keep running. We’d run all day, every day like that. That’s all we had.

We didn’t have any of that electronics. We threw rocks and chased each other down the field.”

Biwott, 28, gets emotional when talking about helping kids run and develop healthy lifestyles. He and his wife Katharine have two children – 6-year-old Xavier and 9-month-old Eve – and he’s happy to support the SRA’s efforts to promote youth fitness.

The personable Biwott, who became a U.S. citizen last year and recently moved from Eugene, Ore. to Folsom, enjoys going to his son’s soccer games and taking walks and going on bike rides with his family.

Biwott ran a lot as a kid, but didn’t get serious about running until he was about 13 and his brothers convinced him to focus more on the sport. He came to the U.S. during high school and lived in Albuquerque, N.M., with his uncle, Simon Sawe, a successful distance runner with several marathon victories.

Biwott started college at the University of New Mexico, then transferred to the University of Oregon, where he was a four-time All-American. He and teammate Galen Rupp led the Ducks to the 2007 NCAA Cross Country championship, with Rupp finishing second and Biwott ninth.

“I had fun in college running for the Ducks,” said Biwott, whose college career was slowed by injuries. “It could have been better … I went through a patch, a little set of injuries.”

Biwott is healthy now. His recent results attest to that: a victory at the 2012 New Orleans Rock ’n Roll Half Marathon, third-place finishes at the USA 10k and USA Half Marathon Championships earlier this year and a runner-up effort Monday in the USA 20k Championships.

“We are very excited to have Shadrack on the SRA Elite team,” said Kevin Pool, who manages the team. “He has established himself as one of the best road racers in the U.S. and we are happy to welcome him to the Sacramento running community.

“I think he will be a tremendous ambassador for SRA in addition to being a world-class athlete.”

“This means a lot to me and my family,” he said. “As a professional runner, little things make a big difference.

“Running for SRA is one of my dreams come true. I wanted to find a group that supports runners. I am really grateful.”

Biwott isn’t the only running success story in the family. Brother Duncan Kibet won the 2009 Rotterdam Marathon in a sizzling 2:04:27, then the second-fastest marathon on record, and brother Luke Metto won the 2004 Boston Half Marathon.

Biwott, who owns a 1:01:40 half-marathon best, hopes his most successful running days are in front of him.

“Any championships coming up I want to get myself ready to be on that team … It’s all coming together.”

Thanks to all those runs as a kid.

SRA events include the recent Gold Rush 100k and Freedom Mile, the Folsom Blues Breakout Half Marathon on Oct. 19, the California International Marathon on Dec. 8, the Super Bowl Sunday 10k Run on Feb. 2 and the Credit Union SACTOWN Ten-Mile Run on April 6.